Irish folk rockers Rend Collective Experiment dropped in to whip up the crowds into a Build Your Kingdom Here frenzy while 23 year old Sam Bailey made his debut at the festival.

Beth Croft and Tom Field are also featured on the album, meaning everyone involved in leading worship on the Soul Survivor platform is in their 20s.

Beth points out that three years ago, some of the worship leaders were even younger – 15 and 17. Both Matt Redman and Tim Hughes were a similar age when they started leading at Soul Survivor.

“It’s a big platform, it’s nerve racking and scary and a huge responsibility that we don’t want to dumb down.

“Because we’re so passionate about raising up the young generation it was great for young people to be able to point to them and say ‘yeah I could do that! I don’t need to be settled down, married with kids and 30 before God can use me but he can use me right now’.

“It was great for youth leaders to see that as well because raising up young leaders can be a risk. For me, I was still figuring out who I was and my life was far from sorted but someone took a risk on me and life would have taken a very different turn if they hadn’t.”

Nowadays both Beth and Sam are on staff at Soul Survivor Watford, helping to lead worship throughout the year. Both have a background in leading at Christian Unions before ending up at Soul Survivor.

Both leaders agree that songwriting is an area they need to invest more of their time in. A surprising proportion of the new album contains covers as opposed to new material from the Watford based leaders.

We have a part to play in resourcing the church which is an amazing privilege.

“Ben was obviously an amazing songwriter. Part of it was getting past that initial [confidence] hurdle, now its shifted to more of a responsibility because people do grab hold of the live albums and we do have a part to play in resourcing the church which is an amazing privilege. So there’s more of a responsibility to be writing and be pro-active.”

With Sam being involved in leading worship at Soul Survivor for the first time, he says he learned a lot. Despite his lack of experience, he is determined to avoid formulas and set patterns, believing God wants to do something different each year.

“It would be very easy to slip into a formula of 'this is what we do to get people here and get people worshipping'. I’ve wanted to honour the culture that’s here and keep investing in it. Out of a place of relationship - that’s when we start to see the kingdom stuff happening.”

Beth admits there are plenty of great worship albums already available. So why produce another live Soul Survivor record?

“There’s tonnes of albums you can buy to resource your church and for your own personal times of worship as well. The reason behind a live album has never been to release an album for the sake of releasing an album. It’s always been to capture what happens over the summer.

“The summer isn’t dictated by the album, the album is dictated by the summer. When making a live album you need good takes of the songs where they aren’t full of bum notes but we’ve always tried to keep the tension of assessing what is right for that morning or evening session and not letting it be dictated by we need another take of this song or that song.

“The kids come first when we’re at the festival. If that means this song gets missed off or that song gets added, that’s the way we do it. 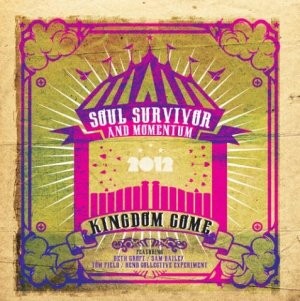 An example of this flexibility can be heard on Waiting Here For You – a song that was never intended to be on the album.

“It’s a balance between wanting these songs to help kids a nd students remember amazing times of worship but also take them back, play them in car and be evangelistic as well and help the young worship leader in his group,” Sam explains.

“Or her”, Beth corrects.

The pair laugh before Sam turns serious. “For the record: I think female worship leaders are great!”

Beth says there’s still a shortage of female worship leaders and is passionate about raising up more.

“It’s a little bit like writing songs: It’s not something I do by default. But as a woman, I feel it’s a responsibility now. I’m still one of two worship leaders out of the eight or nine who lead worship who are girls. I feel a real responsibility to invest in the next generation of girls.”

As for next year’s event. Nothing is set in stone. The team have been known to only give three weeks notice to worship leaders. “We just want to listen to God”, Beth explains. But if things continue the way they are, the chances are there’ll be more younger people coming forward to lead. But given Soul Survivor’s history, that’s not unusual.