Home » Media  »  Andy Kind Ready to Stand Up and Deliver

Andy Kind Ready to Stand Up and Deliver

“I don’t tell jokes in interviews.”If I were talking to a politician, musician or author I’d understand such a statement. But coming from a comedian – and a talented one at that, Andy Kind’s comment takes some explaining. 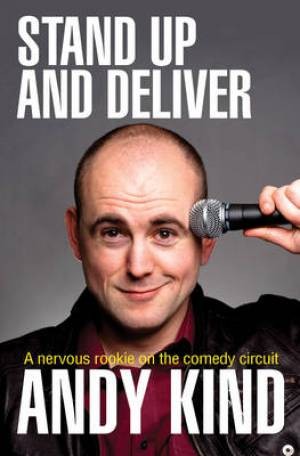 “I’ve never really worked out exactly what comedian I am,” he admits. “I don’t tell jokes. I’m not a gagsmith. I don’t even think I’m an observational comedian. I think I’m a story teller. The thing I’m best at and what I love doing the most is bantering. I love to chat to people and create comedy from nothing. Spontaneous comedy. That’s what I love doing and that defines me the most.”

It was just after his languages degree that the northerner decided to undertake a drastic career change. Leaving behind his extensive knowledge of French, Andy started looking for comedy gigs. He got one. 300 away miles from his hometown of Newcastle, Andy did a 10 minute unpaid set in Bath.

Eight years on, much has changed. Andy is now a full time comic. He’s also got a wife, baby and less excitingly, a mortgage. Andy says he felt “amazing” the first time he got paid for a comedy gig. It may have only been £10 but considering Andy was still living at home, the early days didn’t require a huge income.

“When I was a bit older I realised I needed a bit more, so you raise your expectations to maybe £200 a week. Then I got married so the expectations change even more. I’ve found the more you need to make, the more God provides.”

“If I had not got married I would be quite wealthy now,” he jokes. “I’ve never felt like I’ve had too much or too little and glory to God for that! There’s no reason why I needed to make a living from comedy. I had no right to do it. I feel hugely blessed every day that this is what I do and this is what I make my living doing.”

A Bottle of Urine

Andy’s first book Stand Up and Deliver details his rise from amateur to professional. He says he was in the right place at the right time and feels “blessed” to have had such a stress-free publication process.

The journey to becoming a full time comic was an amusing one. The book contains plenty of stories to make you laugh, and at times cry. Andy sounds almost proud of how he once had a bottle of urine thrown at him by a heckler in Glasgow. “I squelched off stage”, he recalls, adding “feel free to mention that”.

Thanks to the book's popularity and rave reviews a sequel, 'The Gig Delusion' is already on its way. Despite 'Stand Up and Deliver' being produced by the Christian market, Andy says it’s not for the Christian market. He used to describe himself as a clean comic but no longer sees the need.

Andy spends more time talking about what comedy is (and isn’t) than his own act. He has many thoughts on the art form – viewing it as unique because of its demand for attention.

“People are much more cynical [about comedy] than any other art form because it tries to dominate and say 'you’ve got to stop what you’re doing and listen to me'. Music doesn’t do that and art doesn’t but comedy does. It doesn’t work unless it’s given people’s sole attention.”

“If I’m in a pub and someone is playing music I’ll listen along for a bit but then I’ll carry on chatting. It’s not being imposed on me. If I went somewhere and someone tried to make me laugh I’d be quite cynical and think 'who are you to try and impress me?'”

Andy has strong views on both his faith and his profession. Do they go together? Yes and no.

“Comedy has to be funny before it has the right to be anything else. I don’t have a right wing agenda. I don’t have a Christian agenda about comedy. I follow Jesus and I try and live out my relationship with him on stage as I would in my life but I don’t think comedy is a theocracy or comedians should be duty bound to not swearing and not blaspheming.”

Andy says he’s “blessed”. He’s a full time comedian with a top book and loving family. What does the future hold? Despite continually working his way up to bigger and better gigs, Andy is uncertain about his future in stand up.

“It’s getting much more difficult to be away from home because I miss my wife and I miss my baby. Comedy is a livelihood and my family are my life and they count more than comedy. To be away from baby Alice and my wife - that is difficult. I want to just do the writing. As soon as I finish book two I’ll be starting on book three. I’ve got plenty of books backed up. I see myself primarily as a writer these days.”

“The big issue for me now is: 'Can I be a successful writer in the secular world as well as the Christian world?' Ultimately to feel like an effective and successful writer, I would hope to have a deal with a secular publisher and success in the secular world. That’s not to say I demand success and that’s where my value is. My worth is in Jesus and the cross and empty tomb. I’m not trying to covet success unnecessarily. You want to be good at what you do and to be good at what I do it will entail people reading my books!”

Andy Kind Ready to Stand Up and Deliver Discussion