Updated 9:22AM, Wednesday October 17th, 2012 by Sam Hailes, Christian.co.uk Be the first to comment!

Billy Graham’s son Franklin is everything I imagined. Firstly and most obviously, he’s passionate about the gospel. He may have been standing in front of predominantly Muslim school children from the East End of London, but that didn’t stop him preaching Jesus Christ as the Son of God and the Saviour of the world. 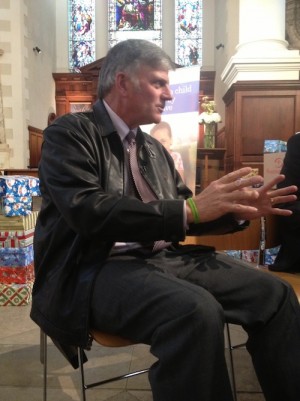 In fact, you get the impression that nothing will stop Franklin Graham from preaching the gospel, and when he ends our interview by quoting Paul’s words “I’m not ashamed of the gospel…” you know he means it.

Franklin was using his rare visit to the UK to raise awareness about Operation Christmas Child (OCC) – a project that will see 8 million children in extreme poverty receive a shoebox full of presents around the Christmas period.

The project was founded by Welshman Dave Cooke in 1990. Five years later, Dave called Franklin Graham and asked him to collect shoeboxes in North America to be sent to Bosnia.

“I said ‘sure’. It was June and it was only a matter of days before I forgot about it. The first week of December I got a telephone call from Mr Cooke who wanted to know how many shoeboxes I’d collected and I thought ‘oh no I forgot!’

“So I told him I’m still working on it. I went to one church in North Carolina and told them about the project. I was hoping to get a couple of thousand of boxes. We ended up with 11,000. At that time we sent them to London and then went in lorries to Bosnia. We did it the next year and we had 30,000 boxes. Dave said 'we’re not going to do this anymore, we can’t sustain it financially so maybe Samaritans Purse would like to take it?'

“We did something that wasn’t done originally. We wanted to make it an evangelistic effort. Not just giving gifts to kids and making them smile because anyone can do that but we wanted to give a gift in Jesus name. That became our focus and our goal and God gave it his Holy Spirit filled blessing. I cannot explain it other than God has done it.”

Prayer: The key to success

When Franklin says God has blessed it, he means it. According to the famous preacher, OCC is now the world’s largest Christmas program.

Samaritans Purse have also developed a discipleship program to accompany OCC. Titled The Greatest Journey, Franklin has big plans for the course.

“It’s my hope and prayer that this year we’ll give out 8 million shoeboxes but I would hope in the next 10 years we’d have 8 million children in discipleship training.”

Franklin believes the key to the success of OCC is prayer. He even goes as far to say he’d rather 100 boxes with prayer behind them than 10000 boxes with no prayer.

Distributing 8 million boxes is a tough task to say the least. Franklin explains each box has to organised by gender and then further segregated according to age group. But with each box often impacting and blessing an entire family, Franklin has seen first hand the fruit of the charity’s efforts.

For example, two years in Albuquerque Franklin was speaking at a large church. In between services, the pastor introduced a young girl to the preacher.

“This girl came and was kind of shaky and was nervous speaking to me. She said 'a few years ago I was a Bosnian refugee at a camp in Croatia and we heard some people were coming with gifts for children. We were so excited we could barely sleep.

“The next day you didn’t come. And the next day you didn’t come. About a week later the trucks showed up and Mr Graham you came. I stood in line with all the other girls, I remember I got my box and I ran back to my tent. We hadn’t bathed for several months and everything smelled. I went back and I opened my box and everything smelled so clean. There was a doll and I still have it today. There was a wool hat and I put it down over my ears and it was so warm. There were mittens and my hands were so warm.

“I’ve now emigrated to the United States and I’m living here and going to the university of New Mexico and I have a job at Walmart. I’ve packed my box. Will you give it to a child like I was a few years ago?' So I took the box and gave it out that year.”

Determined to get the shoeboxes to where they are most needed, Franklin was planning how to get a container into Syria just hours before speaking to me. And while the project has in the past gained support with everyone from Mr T to Alan Shearer, OCC has also had its critics.

“I’ve had some skeptical reporters from time to time,” Franklin says smiling.

“They’ll try to intimidate you sometimes and say ‘you mean to tell me that you’re using these gifts to proselytize?!’ The way they say ‘proselytize’ they make it sound so terrible. I say ‘yeah’. They looked shocked that I’d admit to it.

“I say ‘we want to make Christ known. I want every child to get a box and know that God gave his son to for our sins. He can come into the hearts of all of these children.’ They look at you in disbelief. Then I’ll say ‘you know it is Christmas?’ and they look at you puzzled. I say ‘it’s Christmas we’re celebrating the birth of Jesus Christ, of course we’re going to tell these children about Jesus Christ!’ and they go ‘oh’ and they haven’t thought of that!

“I don’t apologise for sharing Christ. This is who we are and what we do.” 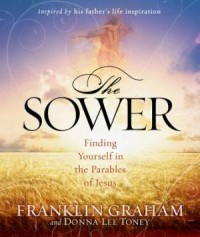 When I ask about Franklin’s new book, he looks thoughtful. “Which one is that?” We laugh as he apologizes he’s been so busy with OCC he hasn’t spent much time talking about his books. I jog his memory. It’s called The Sower.

“It’s written as a devotional and an easy way to read and understand that parable that is of profound importance. We don’t know as we go through life and take God’s word and share it – sometimes his word falls on shallow ground. Our job is to be faithful and not to be discouraged.

“We live in a very secular society. Growing up as a child we were always afraid of communism. NATO built up its forces and everyone was facing the red threat coming from the East. When the Iron Curtain came down secularism rose but we didn’t pay much attention to it.

There’s no difference between the secularist and the communist, they are both godless

“There’s no difference between the secularist and the communist, they are both godless. Secularism has conquered most of Europe and the West and has come in suddenly overnight. As evangelicals we need to be more outspoken today than we’ve ever been about our faith. Paul said ‘I’m not ashamed of the gospel for it is the power of God unto salvation.’”

It's obvious that Franklin isn't just the son of a preacher man. He's a preacher himself, and a convincing and passionate one at that!