Home » Testimony  »  How an Irish Republican & Loyalist both met God

How an Irish Republican & Loyalist both met God

Following on from our interview with Darren and Trevor of The Remission Flow, we asked the two band members to share their testimonies. 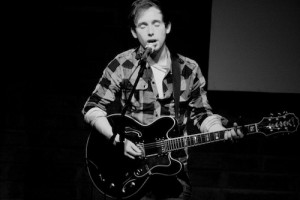 "I grew up in a family of three brothers and one sister who were all very committed Roman Catholic. We were an Irish nationalist family

“We lived a couple of miles south of the border with Northern Ireland so we grew up very aware of the sectarian divide. We would have been a sectarian people ourselves. I had a big faith in Catholisim.

“I went to university and studied philosophy and lost all my faith. Life was meaningless and pointless. Got into a rock band, we got signed toured America and Japan for years.”

Darren refuses to say the name of the band. But his manager has no qualms in uttering the name: “Morrello”. Darren looks both annoyed and amused and moves swiftly on.

“I had been with my girlfriend at that time for about six or seven years. She lived in Edinburgh and left to come and live in Ireland with me because she loved me. I don’t know why! She left her family and education and everything.

“Then I left and went to America to tour. On the second year of touring I was in a bar in Texas with a beer in my hand and she rang me and said ‘I got saved’. When I heard that word 'saved' I didn’t know much about it but I knew it was a protestant thing and my sectarianism just wound up so I called her all the names under the sun for 3 months and spitted abuse at her.

“But God had a plan and had sent Christian men along to speak to me in America. I didn’t really get what they were telling me. I just kept thinking ‘what about the dinosaurs? That must prove God isn’t real’ [laughs] that was what I was thinking!

“When I finished with the other band I vowed I would never play guitar again and I’d never sing. I was finished with all that. I started going to church for three months and felt nothing. I saw all these people looking happy with their hands in the air but it didn’t impact me at all.

“One night I felt the Our Father welling up in my spirit because it was the one prayer I knew was true out of everything that I knew. The pastor said ‘does anyone want to get saved?’ I put my hand up, said a prayer and left church.

“My fiancé was dancing in the streets, ringing everyone and I felt nothing different. I put it down to being an emotional thing and walked away from it. Over three months I kept going to church and God revealed himself every day.

“I read the word and I knew that He was real. I knew what I had done and the sin that was in my life and the things in my heart. It was a gradual thing for me. I fell in love with God.”

With tears welling up in his eyes, Darren finishes his story. Just one year ago, he discovered his then fianceé would not have married him, unless he became a Christian.

“I grew up in the north of Ireland. Completely the other end of the scale from Darren. He was from a Nationalist Catholic background, I was from a Protestant Loyalist background.

“I knew from a very young age about God and had a very basic understanding about Jesus and what he had done. Deep down I knew I can’t leave this earth without being right with God. At some point I would have to come to this realisation and I had that fear of God. I’d heard about hell and I believed it. I was fearful of it.

“The place we lived was quite interesting. It was a large estate very Loyalist and Protestant. In this area there were 64 kids under the age of 10 and we were like a mob going about this place.

“There was one Christian family that would come out every few weeks and stand and preach the gospel. They used to do it on the corner of our house. We pretended we weren’t listening but God was using it. I’m not saying that’s the best way to go about evangelism but at that stage in my life it was having an effect.

“I was on a real downward spiral. I could blame where I was growing up or the people I was with but at the end of the day it was my selfish heart, I wanted to do what I wanted to do. I was going nowhere fast and by the grace of God my parents decided to move back out to the country area. That was a pivotal time in my life because I was coming into my teenage years and as a young man I was easily led.

“I moved out and it was a complete turnaround. The mob wasn’t there and the only thing you could do with your time was go to the local farmer and help him out or kick a ball around the yard all day.

“I started going to church. They had a youth group that was vibrant. They had this life and this hope we talk about which a lot of times we can’t describe but you can see in people.

We can pretend we’re all about peace love and reconciliation but it’s the heart that needs to change for it to last.

“These people became my friends. The youth leaders had a huge influence in my life even though I thought I knew it all. For so long you think you can live two lives. I was about 15 when a couple of mates knew where I was going and that I needed to get saved. I knew it too but I was just messing about.

“They sat me down and said 'if you died tonight where are you going?' I didn’t want to talk about it. I was playing badminton [laughs]. That’s what men do!

The Light That Floods - The Remission Fl

“I was the usual Trev, ‘I’m alright, I’m grand I don’t need any of that’. But I went home that night, turned out the light, put my head down and that’s when it hits. When it’s just you and there’s no one to show off in front of. It was that night I asked Christ into my life.

“We can pretend we’re all about peace love and reconciliation but it’s the heart that needs to change for it to last and for it to be real.

"Darren is one of my best mates now and we have this deep-grounded love for Christ and each other that has allowed us to do what we do. When we’re talking to young people - our music is a small part of what we do - we’re getting issues aired and praying stuff out.

“It gives us credibility and a wider voice because of the diverse backgrounds we come from and it’s a testimony in itself of how God can change things. People say 'God cannot change me, what I have is so deep and hurtful'. We’re a testament to the fact that he can.”

How an Irish Republican & Loyalist both met God Discussion

You need to change that heading. Irish Republican and nationalist are both the same thing. Trevor was a Loyalist.